The Fine Art of Visiting

Sharing points of view politely, just like Grandma taught me. Now that we're visiting, join in the conversation!

A visit from the fire company

What a difference two hours can make.

At 10:30 last night—after scant sleep the night before and a couple of glasses of wine with good friends at dinner—I shut down the house for the night and thankfully climbed into bed.

At 12:30 I woke up to a smell like burning plastic. (If you want to know how I know what burning plastic smells like, let’s just say it has something to do with my son, a stovetop burner, and a Rubbermaid pitcher.)

No detectors or monitors were beeping, but I flipped on a few lights to check for smoke. When I got to the stairwell the smell was truly sickening, and I did venture down one floor to look around.

But then, like any self-respecting, intelligent, independent-minded, problem-solving women’s libber would do: I went to wake my husband.

I do feel kind of  bad about that. He’s had a bad cold for a month and is now on antibiotics for a sinus infection, and while I’d only gotten three hours sleep the night before from his persistent cough, he hasn’t had more than three hours straight for more than a week. And I wasn’t even so sure he could help, even without his nose so compromised—I’m often sensitive to smells he never perceives. So when I woke him, and he immediately said, “What’s that awful smell,” I knew we had a problem.

We spent the next hour looking everywhere. But the smell was so pervasive by that point, and our respiratory tracts so raw, we could no longer tell where it was strongest. Dave, a retired safety man for a gas utility, suggested we call 911. I, who have not surrendered my preference for denial in the absence of empirical proof , argued against it.

We sat with our non-emergency, dumb with lack of sleep, propped up by adrenaline, afraid to go to bed for fear we would never wake. At 1:30 a.m. Dave finally made the call. The operator told us to wait outside our home. 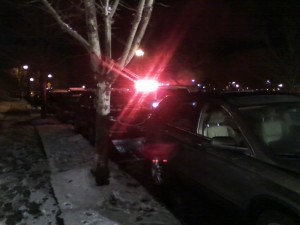 Within ten minutes a bunch of first responder SUVs arrived, lights flashing, along with the fire chief and assistant fire chief. Two big fire trucks we’d heard scream through town had parked outside our address and lit up our row of town homes like it was daytime. Eventually we entertained almost a dozen fully outfitted firefighters with oxygen tanks on their backs—roughly the same number of writers who had attended my afternoon workshop just twelve hours before.

Their procedure is to set an orange cone at the bottom of the steps and hook it onto the railing—each firefighter wears two tags on their gear, and when they enter a building they clip one of them to the cone so if someone doesn’t make it out, the others can figure out who’s missing.

As each of the firefighters tried in vain to wipe the snow from their boots before entering the house, I thought of the writers who had arrived that day in the snowstorm and asked if they should remove their shoes to save our pale carpets. Now, I just wanted to save our house.

The firemen searched the whole house, as we had. Using thermal imaging devices to look for hot spots behind walls and in other spaces unavailable to the naked eye, they double-checked their work inside and out, including the outsides of our neighbor’s houses. They tested the air inside for toxins. Every now and then they came outside so they could return to their search with a fresh olfactory perspective. But one thing impressed me: All of them took this quite seriously. Better safe than sorry, they said.

I recalled seeing a piece on TV where Gavin de Becker, the author of The Gift of Fear, said that most of us know when danger is present—then talk ourselves out of it. In his book he urges us to trust our gut instincts, and I’m glad we (ultimately) did. One of the firefighters told us how detrimental such denial can be: one homeowner called 911 only after their carbon monoxide monitor had been going off for five hours. The purpose of their call was to see how on earth to turn it off.

The cause of the harsh scent, the firefighters finally came to believe: our refrigerator. They unplugged it and pulled off a back panel to look for fire, which they did not find, but once it had been unplugged for a half hour the smell started to dissipate. Their theory was that something inside of it has burned out. In the first photo above, sitting at the top of the stairs, is a fan they’d brought along, but when the air tested safe they packed it back up and left without using it.

Sleep cycle now hopelessly skewed, Dave was wide awake by this point so stayed up to watch on TV a live Grand Prix race he had planned to watch taped today. I couldn’t get to sleep because my feet were so icy from standing out in the snow for an hour so I microwaved a sock full of rice and tucked it into the bottom of the bed to warm them. Then, after cracking the bedroom window for good measure, I eventually was able to catch a few hours of sleep.

As for our stainless steel side-by-side, it’s one of the few aspects of our home we never liked anyway. It doesn’t work wedged into a corner as it is, because we can’t open the door wide enough to get into it without a fair bit of contortion. We’ve chosen to fridge shop rather than see about repairing it. Anyone interested in the old fridge let me know within a couple of days—but consider yourself forewarned!

Have you ever chosen denial over gut instinct—and regretted it? I’d love to hear your story.

13 Comments to “A visit from the fire company”